We all knew it was going to happen, but it still had to be seen to be believed. The New Orleans Saints walked into Soldier Field and proceeded to walk all over the helpless Chicago Bears. For a franchise that had never even made it to the Super Bowl, this coronation was long overdue. Still grappling with the after effects of Hurricane Katrina, Louisiana needed these Saints, hell, the whole country outside of Chicago needed this team. The imaginative play calling of rookie, and coach of the year, head coach Sean Payton was inspired, and matched only by the unparrelled offensive talent of Drew Brees, Reggie Bush, Deuce McCallister and the bevy of talented wide recievers. Brees proved why he is the best quarterback in the league, and Reggie Bush solidified why he should have been the number one overall pick as he proved the Bears defense to be slow and unathletic. But after all, this is what the experts all predicted from the start.

WAIT A SECOND. . . .That’s not what happened at all. God dammit, I know I shouldn’t write these damn things beforehand.

First of all, WOOOOHHHOOOOOOOO. Ok, now that I’ve gotten that out of my system, let’s move on. Well, 39-14, not even I saw that one coming. Luckily I’m a Bears fan, so I had a built in defense mechanism to avoid all the bullshit hype surronding this game that the media was pushing. I truly feel sorry for all those people that wagered large amounts of money on the Saints based on the so called “expert” predictions. The real beauty of this victory for non-Bears’ fans will be to see how all the prognosticators handle this one. I tend to think that at least the ESPN talking heads will just gloss over how they got caught up in the feel good story of the CENTURY and congratulate the Bears. What will make me even angrier though is when they say things like “The Bears had the best record and were playing at home for a reason, they should have won this game.” But I don’t doubt that I’ll hear that once or twice.

Rex Grossman didn’t have a great game, but he made some big plays when he needed to. Besides the obvious 33 yard touchdown pass to Bernard Berrian, there was a really nice 20+ yard completion right up the seam to Desmond Clark that turned the momentum back to the Bears after the Saints had scored twice. The best part of Grossman’s game was that he started pretty slowly, but he never started forcing the ball and opted to throw it away when nothing was there. The other real positive offense note was the 196 yards rushing, including one drive where Thomas Jones just saddled up and carried the entire 69 yards and continued to just punish the Saints defenders. And did you see Cedric Benson running hard? It took him almost two years to do it, but the Saints did not look real excited about tackling him.

The defense also seemed to be out of their funk of late. Part of that may have been Sean Payton’s inexplicable decision to abandon the run completely from the start. I’m not saying he didn’t need to throw the ball to win the game, but the Bears had been giving up big plays in the run game. As far as my prediction that the Bears’ speed would contain Reggie Bush, I was ALMOST correct. Reggie Bush does now hold the record for longest play from scrimmage in a NFC title game, but that was more because the Bears had a backup safety that completely misplayed a pick route, and a rookie corner take one of the worst angles in the history of football, Mr. Bush looked rather pedestrian. Bush only racked up 19 yards on the ground and 50 some yards through the air other than his one huge play. And 30 of that came after the Bears had the game in hand. My favorite play of the entire game was a pass that never even got to Bush. Payton called a play designed to get Bush matched up on the outside with Urlacher, and it worked, so Brees was just locked on the left side but Urlacher ran step for step for him for THIRTY YARDS down the field. Obviously, Urlacher is not near as fast as Reggie Bush, but that is why Chicago loves him. He just wanted it more than Bush.

I’ll be waiting for all the thank you notes the rest of the country owes the Chicago Bears. Could America really handle TWO WEEKS of Katrina coverage, plus “Our Country” commericals and to top it off PRINCE as the halftime entertainment. I think not, my friends. As I sit hear writing this, the Patriots are up 21-6 going in to half, and while I would rather play the Colts in the Super Bowl none of us can really expect Peyton Manning to come up big in the second half. So after tonite I’m sure the stories will be all about the mastermind Bill Belichick and how he’ll concieve a defense to confuse and confound poor, hapless Rex Grossman. Frankly though, at this point I would probably have Rex quarterbacking against the Patriots then Peyton who I believe just shit on the carpet of the RCA Dome heading in to halftime. Maybe the Indianapolis paper shouldn’t have run the headline “Biggest Game of his LIFE.” Dude clearly needed more pressure at this point. Remember to check back here at Joboo for what is sure to be a bevy of Super Bowl predictions in the next two weeks, and I’ll leave you with this . . . 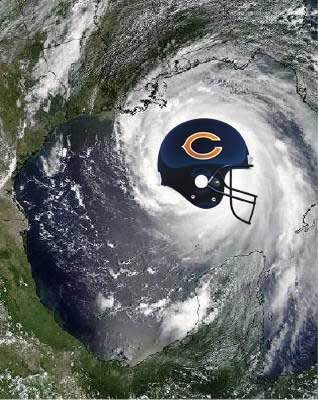